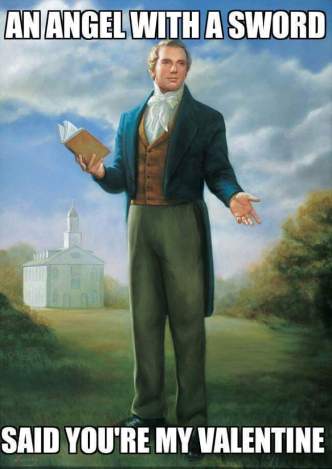 I recently participated in an online discussion on a good argument to someone defending Joseph Smith’s marriages to 14-year-old girls as being the standard age during the 1830s-1840s. My friend, James, had a multi-faceted argument that he agreed to let me share here. In this piece, he mentions children growing up in Joseph Smith’s home. He and Emma fostered several children over the years and Joseph ended up marrying some of the girls–two who were sisters.

To start with:
1) Clearly, it was NOT normal “standards of the day” — because if it was, Joseph wouldn’t have had to keep it so secret from his wife, the church, the rest of the world, and destroy a printing press over it.

2) It’s a double standard to paint Joseph as a poor, unlearned 14 year old farm boy – too young to even decide which church to join — yet say that 14 year olds were so super mature they could totally handle polygamy.

3) The average age of first period was ~17 back then: https://en.wikipedia.org/wiki/Menarche…

14 year olds CAN, and do, have sex. So beyond the “icky” factor, why is it immoral for a teacher to have sex with a student? How old is too old?

We have statutory rape laws to prevent abuse of power dynamics, and preserve the ability of teenagers and children to fully consent to sex. A 14 year old can very easily be manipulated by adults, especially if the adult has a power dynamic in play (eg. parent-child, teacher-student, boss-employee).

In the case of Joseph, you have classic abuse of power — limited time offer, position of authority, threats, grooming, isolation from family members, the list goes on and on. Helen Mar Kimball even describes that she “freely gave to purchase so great a reward.” (e.g. promised eternal salvation for her and her family). Other wives agreed only after Joseph said that an angel would kill him, and faced with the threat of the Prophet’s death, the women agreed. This is like walking through a park and having a guy with a gun jump out, with your bishop held at gunpoint, saying he will shoot if you don’t have sex. This is also called rape. It is wrong.

In the church’s polygamy apologetics, God is a rapist and a pimp, Joseph and the leaders are victims, and women, wives, and teenage girls are to be pimped out to increase the glory of the priesthood leaders:

“Benjamin F. Johnson later remembered Smith teaching during this time about the eternal implications of the families created through plural unions. “The First Command was to ‘Multiple’ [sic] and the Prophet [p.116] taught us that Dominion and power in the great Future would be Commensurate with the no [number] of ‘Wives Childin [sic] and Friends’ that we inherit here and that our great mission to earth was to Organize a Neculi of Heaven to take with us. The increase of which there would be no end.”

Some apologetics say Joseph didn’t have sex, so it’s OK. They are still horribly wrong, because these women were stuck with Joseph. They couldn’t have sex with anyone they chose. It’s also immoral to “claim” a child as yours, but wait to have sex with them until they’re 18. That’s still violating their ability to consent to who they can have sex with.